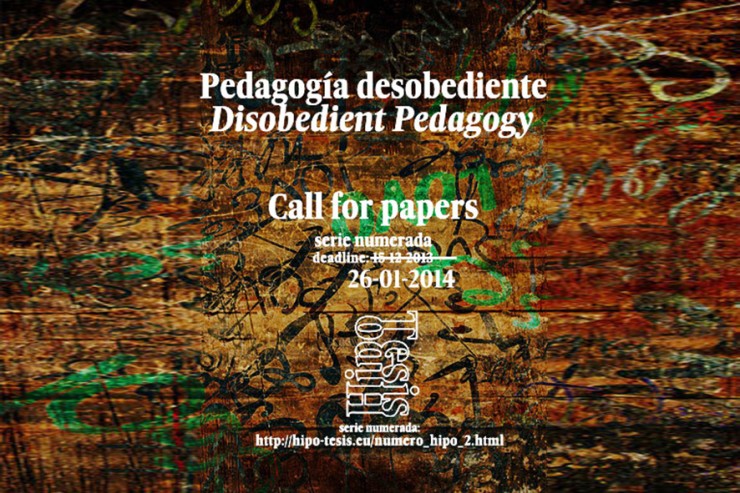 HipoTesis calls for the collection of texts, ranging between 3500 and 5000 words, for its second issue of its Numbered Series on the theme “Disobedient Pedagogy” within the disciplinary fields of Arts and Architecture.

“Being non-travelling travellers” is one of the first phrases that defines HipoTesis (also) as an educational project. “Music for Chameleons” is one of the first encounters between HipoTesis and other projects and/or congregations that propose alternative forms of pedagogy (ZEMOS98, Transductores, Pedagogías Invisibles…). “Invisible Pedagogies” is one of the first HipoTesis’ collaborations to reflect upon pedagogy and the redefinition of our understanding of what education represents. Disobedience in its civil, pedagogical, political, bio-political, domestic, spatial, programmed, performed and democratic sense, will be the subject that vertebrates the new association between HipoTesis and Vibok Works for the Alphabetical Hipo.

“Radical Pedagogies in Architectural Education”, a research Project at Princeton University led by Beatriz Colomina and referenced at the Master in Advanced Architectural Projects at ETSAM. “Rebel Matters”, congress held at the Faculty of Architecture of the Università degli Studi di Genova and directed by Manuel Gausa and his graduate students. “Utopian Pragmatism, Pragmatic Utopianism” is the theme proposed for the Master in Advanced Architectural Projects at ETSAM for the 2013-14 academic course. Platforms such as AAAB Escuela Moderna, Hackitectura, ZEMOS98, Pedagogías Invisibles promote “disobedient” educational activities.

Our goal is to create a breeding ground for pedagogical practices that promotes social, educational, creative and critical actions capable of rebelling, disobeying and radicalising what to this day has been developing indoors at University, outdoors or within its confusing limits.

“Within the University” is a clear concept, “outdoors” refers to projects or proposals carried out by groups or teams of any sort that come together temporarily in any given field, around an activity aimed at a common goal producing an unpredictable training potential.

It’s harder to define the concept of “limit”, which houses pedagogic practices performed by individuals with diverse associations in employment, investigation, teaching or training at University, who pursue, can and should be granted the possibility of becoming part of innovative teaching processes within it.

References to reflect upon

Ivan Illich’s “Deschooling Society” raises doubts regarding the institutions that spend increasingly growing budgets on “schooling”, offering boxed knowledge and teaching with the sole purpose of obtaining certification, erasing the differences between comprehending and teaching, substance and process, knowledge and academic reports. Upholding encounters in autonomous, anarchic, spontaneous and lively ways that do not come about at Universities that oppose these methods, by offering mere resume-merchandise for consumption along with prefabricated courses designed to determine the result at an international scale.

Ignacio Sotelo suggests “a new productive system demanding a proper venture on educating in ways far from a limited transmission of recipes within qualifications, that are increasingly partitioned, but rather on teaching new ways of thinking for one’s self. Under these new conditions we will be able to face the unexpected, the unknown” and quoting Onfray once again, “not thinking is similar to obeying the motion of the world”.

Arendt’s alternative presents a more reserved vision towards the willingness of elders to educate on an utopian tomorrow by saying that “…even children that are being taught to become the citizens of an utopian tomorrow are being denied, in reality, their own future role in politics from the point of view of newcomers, no matter how new the proposed ones by adults are, as the world will always be older than them”.

Where do we find a common ground for these reflections? How can pedagogy become marginal, peripheral, radical, disobedient, rebellious, anarchic, nomadic, micro-revolutionary, spontaneous, autonomous, lively and yet allow the necessary space and time for the future role of young people amidst their cultural, political, architectural and artistic environment? How does the indoors, the outdoors and University’s limits be transformed into “communicating vessels” of this sort of radical experiences that deliberately “distort” our common views on pedagogy?

2013-07
Launch of the theme of extended issue. Opening for collection of long essays to take part in Hipo 2.

2014-01
Acceptance of received articles and start of the evaluation process.

2014-04
Second phase of evaluation of articles, if it is necessary.