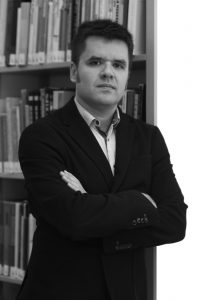 He has gained various research grants such as the postgraduate scholarship from “la Caixa” Foundation or the Swiss Government Excellence Scholarship for Foreign Scholars and Artists to do research at the Swiss Federal Institute of Technology in Zurich (ETH Zurich, 2013-14). His research interests stem from a deliberate, equidistant position between architectural theory and practice and are focused on design methodologies, as well as the search for new relations with other disciplines within the artistic, research and editorial practices. His research work has been published in specialized journals, awarded at the 14th Spanish Biennial of Architecture and Urbanism, and shortlisted in the 11th Biennial Competition for Doctoral Dissertations in Architecture arquia/tesis 2017 by Arquia Foundation.

He holds a professional practice for more than a decade. His work as an architect, alone and in collaboration with other architects, has won several awards and mentions, highlighting the j5 Competition for Young Architects in Andalusia, the Municipal Civic Centre in Boecillo (Valladolid), the CSCAE Experience/Future Competition, the VIII Architectural Awards of Castilla y León, the V Enor Architectural Awards or the NAN Awards for Architecture and Construction. His work has been exhibited at the IV Conference of Architects of Spain in Valencia or the Museum of Spanish Contemporary Art Patio Herreriano in Valladolid. He is a member of the Professional Association of Architects of Madrid (COAM) and the Finnish Association of Architects (SAFA), and he is COAM correspondent in Finland since 2015.

He is co-founder and co-editor-in-chief at HipoTesis Platform. His work as an editor has been awarded, always with collaborative works, among others in the 8th Latin American Biennial of Architecture and Urban Planning (VIII BIAU, 2012), the 13th Spanish Biennial of Architecture and Urbanism (XIII BEAU, 2016) and the FAD Awards in the category of Thought and Critique (First Prize ex aequo, 2016).