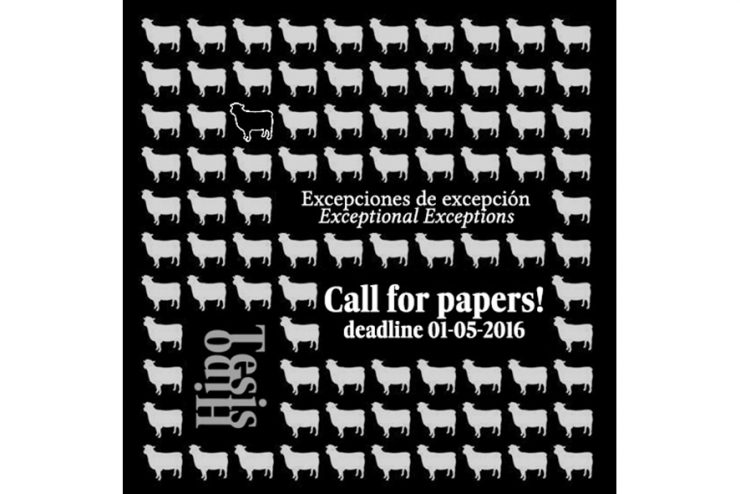 HipoTesis Numbered Issues is searching for collaborations for Hipo 4 in the form of texts between 3500 and 5000 words.

The Spanish dictionary defines exception as the deviation from the rule or general condition of the other things of its same kind. Considering this definition we can recognize as an exception:

Those ways of living that deviate from the regular ones, social relations that are accomplished and, even being of the same kind, show themselves as different.
Those artistic, architectural or social movements that deviate from the prevailing ones, differing from them and being able to overthrow the established canons.
Those management, cultural or educational projects that differ by their ability to achieve their aims under alternative routes or unusual models.
Those artistic works within the own production line of a single author.
Those project tools or strategies that are not usually recognized as such.
Those conformed spaces, objects or cities, developed or established infrequently or far away from the normality.

In HipoTesis we believe in the importance of the idea of exception. In 1962 Thomas Kuhn in his book “The Structure of Scientific Revolutions” underlines the concept of paradigm. According to Kuhn, a paradigm is a way to build a scientific thought, never complete and always open to adding those theories to strengthen it over time. However, although the paradigms constitute the core of scientific positions and as well the architectural ones, events or arguments that can not be incorporated into those positions already exist, and they are still valid and recognized. It is about exceptions, called “paradigms anomalies” by Kuhn, which have the potential both to change and to create new revolutions.

This issue of HipoTesis Numbered Issues aims at bringing together thoughts on those exceptions that have been decisive, important, significant. Not necessarily because they are able to break down the prevailing paradigms, but because they can become records, recognizable moments, designated, outlined, which at any time can make the leap and become rules to be established.

For all that, we do a call to the exception understood in its broadest sense, as isolated cases, ways of working, intellectual positions, historical or cultural events. Exception not only as everything that deviates from the rule or the establishment and therefore becomes its debtor, but also as a new opening, a new look towards the future. Because we believe that only with the existence of exceptions, established standards are questioned, coming into play precisely the doubt and providing opportunities for change. Exceptions of Exception are projective ideations and as such they interest us.

Calendar
2015-12 Launch of the theme of extended issue. Opening for collection of long essays to take part in Hipo 4.
2016-05-01 Deadline for the collection of long essays for Hipo 4.
2016-06-01 Acceptance of received articles and start of the evaluation process.
2016-07 Modification of articles following evaluation criteria.
2016-09 Second phase of evaluation of articles, if it is necessary.
2016-10 Initiation of layout process.
2016-12 Online publication of accepted articles.